Автор:Kirill (Gundyaev), Patriarch of Moscow and All Russia 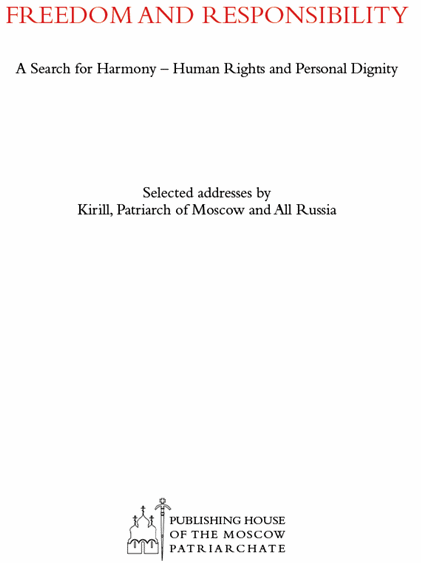 Kirill, Patriarch of Moscow and All Russia

A Search for Harmony — Human Rights and Personal Dignity

Kirill, Patriarch of Moscow and All Russia

PUBLISHING HOUSE OF THE MOSCOW PATRIARCHATE

Foreword by the publishers 9

A common approach to Church unity and the renewal of mankind (Paper given at the 1st International Theological Seminar “Toward a Theology of the World”. Budapest. December 14-18. 1987) 12

The contemporary environment: Liberalism,traditionalism and the moral values of a uniting Europe (Article in “Nezavisimaya Gazeta”. May 26, 1999) 27

Religious faith as the source of social norms. Correlatingtraditional and liberal values in individual and societal choices (Address to the Theological Conference of the Russian Orthodox Church “Orthodox Theology at theTurn of the Third Millennium”, Moscow, February 7-9, 2000) 36

God’s plan for man and free will (Address to the International Theological Conference “Eschatological Teachingof the Church”, Moscow, November 14, 2005) 68

No freedom without moral responsibility (From a meeting with journalists from the “Literaturnaya Gazeta”, published in no. 45-46, November 2-8 2005) 80

The Russian Orthodox Church and the Christian dimensionof the problem of human rights and freedoms (Article published in the newspaper ‘Izvestia’, April 4, 2006) 100

Human rights and their moral foundationsin European religious communities (Presentation at the seminar ‘The Evolution of Moral Values and Human Rights in Multicultural Society’, Strasbourg, October 30, 2006) 110

The value of the human being as the bearerof the Image of God and his dignity (Address to the seminar ‘Faithfulness to Traditional Christian Values and Freedom of Conscience’, Moscow, December 20, 2006) 119

Human rights and religious principles (Address to the regional meeting of the representatives of Christian churchesand communities of the CIS countries and the Baltic States preparatoryto the 3rd European Ecumenical Assembly ‘Modern Europe: God, Man and Society.Human Rights and Moral Determination’,Moscow, February 27, 2007) 123

Inter-Civilizational Dialogue (Address to the seminar ‘Dialogue between Cultures and Civilizations:a Bridge between Human Rights and Moral Values’, Paris, March 13-14, 2007) 127

Inter-relationship of human rights and religious and cultural traditions (Address to the conference Human Rights and National Identity’, Moscow, April 18, 2007) 135

Dangers of modern theology (From an address at the Kiev Pecherski Lavra to the bishops, clergy, monastics,laity, teachers and students of the Kiev Theological Academy, Kiev, July 29, 2009) 172

Freedom and moral sense - destruction of their inter-relationship (From the speech at the Jubilee Event marking the 200th anniversaryof St. Petersburg Theological Academy, St. Petersburg, October 9, 2009) 178

Protecting dignity freedom and human rights. (Message at a meeting with the Chairman of the Parliamentary Assemblyof the Council of Europe, Moscow, October 13, 2010) 191

Problems of today’s world (From the speech at the meeting with the members of the Global LeadershipGroup of the Davos World Economic Forum in Davos, Moscow, March 12, 2011) 194

Living according to conscience and truth(From the address at the Easter reception at the Ministry of Foreign Affairsof Russia, Moscow, April 28, 2011) 201

Spirituality, morality, law(From the speech at the round-table conference ‘Spirituality, Morality, Law’ at MoscowUniversity of Ministry of Internal Affairs of Russia, Moscow, March 28, 2012) 215

Maintaining spiritual and moral purpose (From the speech at the 4th Congress of Leadersof World and Traditional Religions, Astana, May 30, 2012) 218